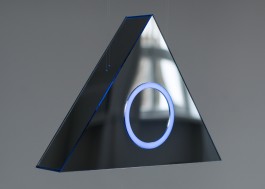 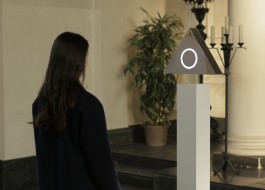 Aitha is a unique interactive experience exploring the use and omnipresence of
information and knowledge. The installation contextualises the experience with
religious omniscience and the undeniable links between the two.
The name Aitha is inspired by the abbreviation of Artificial Intelligence and Aether
which, in Greek mythology, was one of the primordial deities and personification of
the upper air.

AI & Machine Learning are already big parts of our lives, knowingly or unknowingly.
We are using Google to look for answers to our most intimate questions and confess
our darkest secrets. We talk to Alexa like we would only to our closest of friends.
While this technology undoubtedly possesses incredible abilities, there is no
transparency as to what happens with the vast amount of personal data from all
of these queries. This poses potentially enormous risks to our privacy and security;
shaping and controlling our behaviour. Similarly, in history, religion has often been
abused as an instrument of power to control and shape societies.

Aitha addresses both these concepts of control through Big Data and the power
of religion. Behind the brain of Aitha’s answers lies a neural Network, which has
been trained on the oldest religious writing known to mankind: the Tanakh. After
approaching Aitha, the viewer can ask any question that might be concerning them.
Every question is then answered individually in real time, creating an interactive
dialogue between the viewer and Aitha. As with every religious writing, it requires the
viewers own interpretation of Aitha’s replies to procure meaning.

Any cookies that may not be particularly necessary for the website to function and is used specifically to collect user personal data via analytics, ads, other embedded contents are termed as non-necessary cookies. It is mandatory to procure user consent prior to running these cookies on your website.